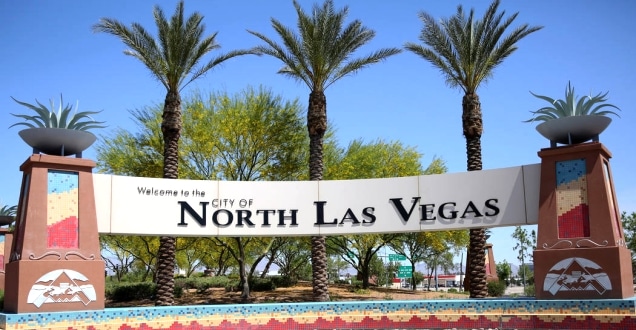 Like the rest of the world, the City of North Las Vegas’s crisis management skills were being put to the test in spring 2020. The COVID-19 pandemic had roiled the city’s businesses and residents. Companies were scrambling to figure out how to continue operations in the midst of stay-at-home-orders and social distancing guidelines, while everyday people’s lives were in flux as they weren’t sure if or how they would be able to earn a living and keep a roof over their heads.

The City of North Las Vegas didn’t want constituents to be alone in these struggles, though. City officials secured $23.8 million in federal Coronavirus Aid, Relief, and Economic Security (CARES) Act funding in late March that same year to help the city’s private organizations and taxpaying citizens through these unprecedented circumstances.

Although the CARES Act allocation was generous, municipalities still faced a monumental task in getting these dollars into taxpayers’ hands during a global pandemic. North Las Vegas, like many other U.S. cities and counties suddenly tasked with standing up programs of tremendous magnitude and complexity, had to distribute an unusually massive sum of money in a limited timeframe, all while complying with a score of auditing, reporting, and documentation requirements.

The legislation granted authority to reimburse individuals and businesses for a wide variety of COVID-related hardships, but recipients had to follow specific steps in order to prove that they qualified under the letter of the new law. The inner workings of these CARES application and funds distribution processes would involve a number of City of North Las Vegas employees passing lots of documents through multiple checkpoints. This undertaking would be complicated enough on a small scale, let alone in a brand-new program that was expected to net tens of thousands of submissions in just a few weeks.

On top of this, the City, in an effort to get funding out quickly when constituents needed it the most, took the unique and innovative step of repurposing its Libraries Department staff to man a live call center that reached out to every business operating within its limits to invite them to apply for aid and guide citizens through the process. The librarians had to transition quickly into new job duties that required them to familiarize themselves with an intricate web of federal rules, restrictions, and mandates—everybody was learning on the fly!

Moreover, the city had to empower all parties to carry out this program remotely. That meant citizens and business owners needed to be able to submit their applications and supporting documentation from their own home or office, while the library staff had to collaborate on these submissions virtually. Executing a paper-based process on this scale is hard enough in person. It would be near-impossible to do it with staff dispersed across the city.

“We knew we’d receive a deluge of applications right out of the gate, so whatever form and process we put in place had to shield our citizens and employees from the natural complexities of delivering a federal grant program,” said Dennis Moriarty, IT Director, North Las Vegas. “It was a must that we make the user experience intuitive for applicants, and that we give our team members tools that help keep track of the many documents and extensive back-and-forth on the back end.”

The City of North Las Vegas turned to SimpliGov, a leading provider of integrated digital forms and workflows that are purpose-built for government, to build dual processes for distributing business grants and housing- and utilities-related aid, the latter of which was dubbed the CARES Housing Assistance Program (CHAP) internally.

In both workflows, SimpliGov’s Forms Wizard functionality enabled the city to delineate every element of the CARES Act’s comprehensive application form into a digestible online format using a simple drop-down menu. End users could fill out these forms from any device or browser. They could also upload the requisite files—the CHAP program alone, per federal regulations, required proof of hardship, W-9 forms, lease agreements, mortgage statements, and a host of other documents—into an accompanying portal with push-button simplicity. And in the case of the business grants program, forms could be completed in English or Spanish, which was key for the City of North Las Vegas, a fast-growing minority-majority city.

The SimpliGov platform automated the routing of each application immediately upon initial submittal. Applications first went to the library manager, who acted as a gatekeeper. She would use the SimpliGov system to either send the submission back to the applicant to collect additional data or assign it to a team member for a more thorough inspection after confirming that basic information was completed correctly. The designated reviewer would automatically receive an email alert and begin reviewing the application against a lengthy built-in checklist of items required by the legislation. The reviewer could send the application back to the requestor—again, with an auto-generated alert—for more information through the SimpliGov platform, if needed, or move it back to the gatekeeper for final approval.

Any given application could potentially go back and forth between the applicant, gatekeeper, and appointed reviewer up to a dozen times, depending on the complexity of the case. The SimpliGov app kept track of the status, correspondence, and documentation associated with each submission in one central database, which could be accessed by authorized staff members at any time.

Approved applications were then shepherded to the city’s finance department through SimpliGov, which immediately cut and mailed a check to the constituent. In the case of the CHAP program, the city was able to seamlessly integrate SimpliGov with its existing ERP system using a simple API.

“Delays and dropped balls would have been inevitable if we attempted to conduct these procedures manually. Even the most meticulous of individuals would have struggled to keep track of hundreds of submissions moving back and forth between people’s inboxes,” said Moriarty. “SimpliGov prevented disorganization that would have left our constituents in the lurch in the direst times of need.”

SimpliGov’s no-code, cloud-based architecture meshed quickly with the City of North Las Vegas’s existing infrastructure without a hiccup, enabling the city to unveil the new CARES application to the public in less than three weeks. The Emergency Rental Assistance Program, coordinated with partners at Clark County, distributed $7 million in rental and utility assistance to residents, preventing subpar living conditions and homelessness. The City also processed hundreds of business and nonprofit relief applications over just a few months, with positive reviews from customers touting its ease of use and great customer service.

The City of North Las Vegas set the bar for Nevada by distributing almost $20 million—83% of its total allotted CARES Act dollars—directly to taxpayers, by far the highest percentage of any municipality in the Silver State. In total, the SimpliGov-powered digital form and process saved North Las Vegas taxpayers 400 personnel hours in labor and quickly pumped out critical relief to residents and businesses when there was no time to waste.

“We had great ambitions, but a city of our size couldn’t realistically meet our lofty objectives without a platform as sophisticated as SimpliGov’s,” said Moriarty.

Just as important, the City of North Las Vegas’s CARES programs proved that a government could quickly adapt to the unforeseen and seamlessly meet the ever-changing needs of its citizens. Business owners who had to close for long stretches, operate at a reduced capacity, deal with an increase in supply costs, or purchase extra personal protective equipment (PPE) because of COVID-19 were able to survive through those first few months thanks to the aid the City delivered. Renters and homeowners who lost their jobs or saw a drastic cutback in their hours and income were similarly able to keep the lights on and make rent or mortgage payments.

“Our CARES programs were literal lifesavers for our businesses and residents, and without SimpliGov, we would not have been able to provide so much assistance so quickly and efficiently,” said Moriarty. “Our CARES programs proved to taxpayers that we had their backs.”

Documents: The Foundation of the Integrated Form-Workflow-eSignature Solution—and of the Modern, Digital Government

When workflow automation serves as a bridge that prevents electronic forms and signatures from working in a vacuum, governments create streamlined, orderly processes with significantly fewer errors that

Workflow Automation: The Bridge That Connects Digital Forms and Signatures

Workflow Automation: The Bridge That Connects Digital Forms and Signatures Recently, we expanded on why it’s so important to keep digital forms and electronic signatures together in

SimpliGov has been recognized by and is proud to support the following organizations: